The talented young Swede Ludwig Svennerstål confirmed at the London Olympics 2012 that he meant business, when he as the youngest rider at the Games, at 21 years old, qualified to compete in the individual finals with his Hanoverian gelding Shamwari. The Swedish team finished just outside the podium in 4th place. Ludwig has since consistently delivered at the highest level, ranking amongst the top 10 in the world on multiple occasions as well as winning CICO***Nations cup and being placed at Badminton, Burghley and Luhmühlen. 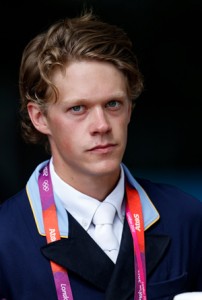 Ludwig’s ambition to become established on the international stage was realised in 2013, when he won a Team Silver Medal at the European Championships in Malmö, Sweden, with his Olympic horse Shamwari. The horse and rider combination had their eyes on an individual medal, but after two poles came flying down during the final show jumping phase, they had to settle for a team silver and an individual 10th placing.

This strong performance together with 11th place at Luhmülen CCI**** with his other mount King Bob, and 8th place at Burghley CCI****, were major reasons why Ludwig was nominated and the winner of the prestigious international award as Shearwater/ERA Rising Star Award in 2013 at the Event Riders Association’s annual ball.

The award is given to a young rider who has caught the eye of the judges and made their mark on the international circuit with numerous impressive results, and the decision in giving Ludwig the award was unanimously agreed up on by the jury.

Born in Stockholm, 24 August 1990, Ludwig started riding in a local riding school, Östermalms Ridskola, in Stockholm at the age of 7, and three years later he got his first pony, which he shared with his little sister Ellen. He quickly outgrew the pony, and at the early age of 12 was already riding his mother´s horse, Wirginia, who became his first competition partner. At 15, Ludwig moved on to his second horse, Thelma, with whom he won several medals at national and international championships, including Individual Silver and Team Gold at the Young Rider Nordic Baltic Championships and Team Silver at the Junior European Championships.

In 2009, Ludwig finished high school at Enskilda Gymnasiet in Stockholm and told his family and friends that he wanted to be part of the Swedish Team at the Olympic Games in London 2012.

His friends were laughing, but Ludwig was determined and focused on the task. He brought his top horses Shamwari and Alexander to England and trained for three years with Chris Bartle, British International event and dressage rider, winner of Badminton Horse Trials in 1998 and European Team Gold Medallist in 1997. With the guidance of Chris, Ludwig won his place on the Swedish Team who finished in 4th place at the Olympic Games in London 2012 and a Team Silver medal at the European Championships 2013.

After a brilliant couple of years with Chris, Ludwig moved his horses to double Olympic Gold medallist and eventing legend Mark Todd in 2014 and kick started the season with a great performance at Badminton 2014 to finish in 8th place with Alexander. In 2015 Ludwig finished 14th in Luhmulhen CCI**** and was placed at both Aachen CICO*** and Chatsworth CIC*** with multiple horses and in 2016 Ludwig won the Nations Cup CICO*** in Strzegom with King Bob, beating the current  World Number One, European and Olympic Champion just over a month away from the Olympic Games in Rio de Janeiro. This secured Ludwig’s selection to his second Olympic Games and his 7th consecutive Championship for Sweden. At Rio de Janeiro Ludwig partnered the young but talented Aspe, who at only 8 years old was the youngest horse at the Games. They finished on a respectable 26th place just outside the individual final. Learning from the disadvantages of riding an inexperienced and young horse at such a difficult competition, Ludwig is now making great efforts to have a strong team ready for Tokyo 2020 in pursuit of an individual Olympic medal.